This past fall, dozens of key couples in South Asia attended a FamilyLife training event to help them take their marriages to the next level and to equip them for family ministry. These couples were from India—where FamilyLife has a thriving ministry—and from Bangladesh and Nepal, where staff and volunteers with FamilyLife are just starting brand new family ministries. Although these are challenging areas for Christians to reach with biblical truths, the sparks for FamilyLife ministry have ignited, and the flames are slowly spreading.

Jim and Judy Burrows, FamilyLife Global representatives from the US, led the trainings along with a sharp and creative Indian couple (names withheld for security purposes). New laws going into effect in India will make it very difficult for Christians to share the gospel there, but FamilyLife is catching on as a strategic (and safer) way to spread the good news.

Their first stop was New Delhi to serve couples from the northern regions of India, where there are over 600 million Hindi speakers. They organized a two-day FamilyLife seminar followed by two more days of training. They built into the marriages of the attendees first, then taught them how to speak at FamilyLife events and lead small groups.

This training process was repeated as the team journeyed south to Bengaluru (also known as Bangalore). One wife said, “We needed this weekend so much. My Dad died one month ago; two months ago we found out that our son is autistic. I have not been making my husband a priority.” Another said, “Our marriage is struggling. I learned about expectations. I can’t expect [my husband] to know what I want.” The couples expressed enthusiasm to take what they’ve learned and pass it on to others.

Next the training team traveled east to the country of Bangladesh, where FamilyLife has never had a ministry presence. The country is 99% Muslim.

A pastor and his wife came to the training feeling unsure if this content would be applicable for Bangladesh. But after the first day, he was convinced the training was 100% applicable! He and his wife said they are ready to promote the material in their country.

The training team again taught how to launch and facilitate small groups using HomeBuilders® studies and The Art of Parenting®. At one point, Jim and Judy Burrows had all the couples divide into groups to go through a HomeBuilders lesson together for practice.

“At first, they were sharing in English to the group, for our benefit,” said Jim Burrows. “But seeing some of them struggle with English and knowing that not everyone there understood English, I called an audible and said to them, ‘Please share in Bangla.’ It was as if a switch was turned on. Not that there was not energy and excitement before; there was. But when they all switched to Bangla, it was as if gasoline was poured on the fire of their excitement and their laughter. If any of them had doubts about using the material, all doubts vanished during that sharing time.”

A key couple from Nepal also traveled to Bangladesh to attend the training. They have been tasked with starting FamilyLife in their country. They will likely start with a small-group strategy and will continue to be mentored by the Indian couple who helped lead these training events.

Attendees were encouraged to take what they learned and put it into practice in their own churches and communities. The volunteers in New Delhi and Bangaluru were challenged to write out a Weekend to Remember® talk and submit it to the training team for review, then present that talk in a live presentation. They were also encouraged to start a HomeBuilders or Art of Parenting small group. One of the key volunteers in India has already hosted a Weekend to Remember in their church and started small groups, and others are launching groups soon. This is evidence that the attendees heard loud and clear the message to “pass it on.”

And this is our prayer and hope, in South Asia, as in the rest of the world: That families would see their marriages and families redeemed by the work of Jesus, and with God’s help fan the flames of their faith in their corners of the world. 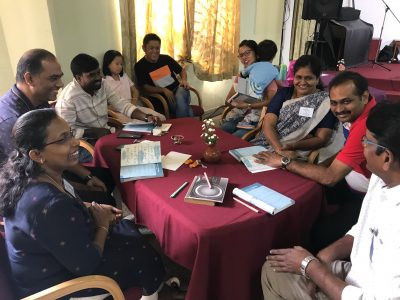 “What does the Bible say about divorce?” Wayne Grudem

with , January 30, 2023
What does the Bible say about divorce? Does God truly say it's out of the question? Theologian Wayne Grudem articulates what changed his mind.