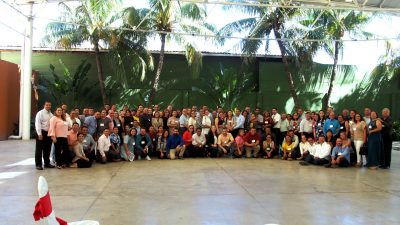 Orlando and Merce Madrigal, FamilyLife leaders in Costa Rica, have been assisting the FamilyLife ministry in Nicaragua for the past few years, praying that someday God might raise up Nicaraguan leaders to take charge of the ministry and bring growth and revival to the families of Nicaragua. That prayer was recently answered when the Madrigals traveled to Managua and trained 97 people to do FamilyLife ministry.

Last June 2019, four Nicaraguan couples were certified by FamilyLife in El Salvador, and one of the responsibilities given to these new volunteers was to launch and grow the family movement in their nation. As part of the plan to reach this goal, on November 23, 2019, Orlando and Merce, along with an amazing local FamilyLife team of volunteers who donated their time and money to make this dream possible, organized an orientation and training in Nicaragua. The trainee couples arrived at a hotel in Managua, eager to learn about FamilyLife resources, be trained as HomeBuilders® facilitators, learn to use FamilyLife’s Art of Parenting® and the Like Arrows™ movie, and catch the vision of a family revolution in their country. The group represented six major cities in Nicaragua.

While excitement and enthusiasm are high, the Madrigals know that changing a nation is hard work. “To generate a movement in favor of the families of a nation will always be one of the biggest challenges we face,” said Orlando. “However, there is no doubt that this is God’s time for such action.”

Next steps include plenty of prayer, planning, and a subsequent training for those who begin FamilyLife ministries in their cities in order to fully train them for further growth and development. We pray God continues to do a mighty work through these volunteers in Nicaragua!