As Islamic fundamentalism increases in parts of Nigeria, it can be a difficult place in which to minister. But that isn’t stopping FamilyLife leaders Ademola and Ajoke Adebiyi. “We will not give up our mandate of sharing the gospel,” says Ademola. “We need more creative ways of penetrating the physical barriers while we trust the Holy Spirit to deal with heart and mind barriers.” One of the ways they’re doing this is through a vibrant radio ministry. 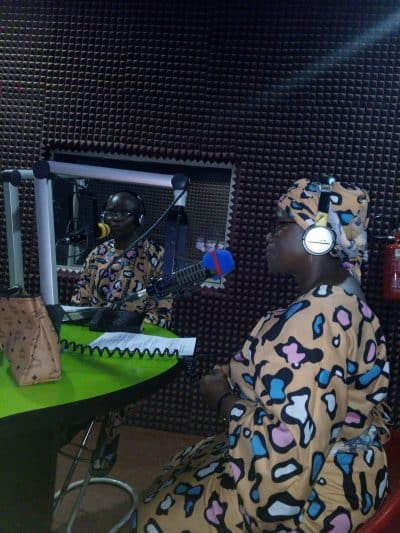 Radio is proving to be an effective method to reach local Muslims. “Since people listen from the comfort of their rooms, the peer pressure and communal barriers are removed,” Ademola explains.

Recently a woman called and said, “I’m a Muslim; yes, I’m a Muslim, but I listen to your program, and it’s helpful.” Another one visited the FamilyLife office in full hijab (the Muslim head-covering wear) and requested an appointment with the Adebiyis to learn more.

Nearly every Sunday during the weekly broadcast, people call in and express how insight from the Word of God is helping their marriages. The Adebiyis are thankful for the many opportunities they’ve had to share the gospel on the air. They’ve led Nigerians to Christ over the phone and through face-to-face counseling appointments.

Last year they broadcasted a series called “Sex and Marriage” for several weeks. One call came from a prison inmate on death row who requested private counseling via phone calls. The Adebiyis agreed.

The inmate explained that sex outside of marriage had led him to the mess he was in today. Over the course of six weeks, his story unfolded. He met a young lady and began a relationship with her. Twice she got pregnant, and twice she aborted the pregnancies. The two wanted to marry, but the woman’s family was not supportive. When she got pregnant for a third time, the couple decided they would use the pregnancy to convince her family to agree to their marriage. But around the third month of pregnancy, she told him she had lost the pregnancy. He was enraged and believed she’d had another abortion without consulting him. As they argued, he beat her, and she died in his arms.

The inmate was full of remorse for his sins and wondered whether he could experience God’s forgiveness. The Adebiyis shared many scriptures with him about forgiveness, Christ’s substitutionary death, assurance of salvation, and other basic Christian disciplines for spiritual growth.

After six weeks of communication, they never heard from him again. They pray that the scriptures they shared brought him to faith and that God will use him to minister to those around him.

For now, Ademola and Ajoke continue to reach out through radio, not fully knowing all the ways God is using it in hearts and lives across their country. They may not be able to see all the results of their ministry, but they’ve seen enough to trust that God is on the move in Nigeria.