FamilyLife Moldova’s family camps provide an opportunity for families to spend time together and create fun memories—but playing games isn’t the only goal. The activities also include marriage enrichment for the parents, Bible stories for the kids, and opportunities to hear and respond to the gospel. The FamilyLife team is seeing God use these camps in powerful ways to bring families closer together and closer to Him.

Over the summer, Radu and Liuda Cucos, FamilyLife leaders in Moldova, were asked by two couples in Budesti to organize a camp for families from that village. With some prayer and planning, they and their team put together a program for 160 people.

For part of the time, the campers were divided between children and adults. The children played games and learned about the Bible while parents attended marriage talks with themes like the purpose of marriage, communication, and the covenant of marriage. The speakers led the group through the biblical perspective of a successful marriage and taught salvation through Christ.

One game, called “Real Life,” brought parents and children together to go through various stages of life and attempt to “win a million dollars.” The game was set up so that it was impossible to collect that amount. However, anyone could win if they had the “fully paid” card by hearing the gospel and believing in Christ’s sacrifice. Although it was a game, the gospel portion was real. The presenters explained that although a person can’t earn salvation through his own striving, he can receive eternal life by being “fully paid” by Jesus.

One teenager who attended was sixteen-year-old Alin. He grew up in a family where there was no talk of God. Alin had many questions about relationships and the meaning of life. He had seen his parents face difficulties and complications in their relationship, and he had watched his neighbors’ family breaking apart because of an affair.

When Alin’s parents and their neighbors (the same ones who were recovering from the aftermath of an affair) received an invitation to the family camp, they hesitated at first but finally agreed to go.

During the “Real Life” game, Alin learned about God. He became curious and began asking questions. The man who played the role of “God” for the game talked to Alin, asked him questions about his life, and shared the gospel. Alin realized his need for a Savior, and he met the real God!

During the last night of camp, while the children met for a program with songs and Bible stories around a campfire, the parents had a romantic evening. The organizers spoke on the covenant of marriage and compared it to the covenant we can have with God through Jesus Christ. The couples had the opportunity to renew their marriage vows in a touching final ceremony.

Upon returning home, Alin also told eighteen of his friends about how he had received Christ at the camp. Twelve of them were touched by his testimony and decided to give their lives to God as well!

The adults were also eager to continue building on what they had learned following the camp. Seventeen families from the village have begun meeting together to go through The Art of Marriage® in small groups to continue growing in their faith and in their marriages.

What began as a few days of fun at a family camp has turned into a chance for many to experience reconciliation, spiritual growth, or even the beginning of a lifelong walk with the Lord. 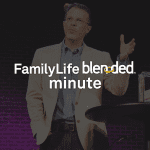 Link to the Past